Understanding the Three Types of Estimates 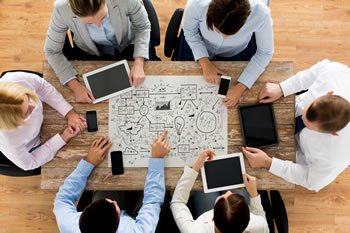 If you have an idea for a web or mobile app development project, one of the first things on your mind might be, “How much will it cost?”

Based on almost 2 decades of experience, we can tell you that this question is not that easy to answer accurately without investing a lot of time upfront.

How much it costs to build a mobile app is highly dependent on the nature and complexity of the app. To answer the perpetual question about costs, we offer three kinds of estimates with varying degrees of accuracy.

Each type of estimate offers varying degrees of accuracy and information. Each is a designed for a different circumstance.

Let’s take a look at these 3 types of estimates in detail:

A ballpark estimate will give you a rough idea about costs by providing a potential range of costs you might expect for your project. The purpose of this kind of estimate is to answer the question of whether or not you can even pursue the product development and what you might be looking at to do so.

A ballpark estimate is free and includes up to a one hour meeting with you, and usually takes 1 -2 hours of additional research and estimating on our part. This quote is not designed to have a high degree of accuracy but to give you a sense of the potential costs.

Should You Bank on a Ballpark Estimate?

Because a ballpark estimate is a rough guess, it should not be taken with much authority. Ball park estimates have been known to vary substantially from a “Detailed Estimate” by as much as 50%-80% because of the many unknowns within the project.

In a “Ballpark Estimate” it’s easy to overlook the small details and these add up. Such items include:

Should You Start Your Project with a Ballpark Estimate?

The short answer is mostly NO. If you’re trying to find out if building your idea is viable and what it might cost, then a ballpark estimate might be okay initially. That will give you a sense of what you’re up against and whether you can reasonably pursue project.

If the ballpark estimate seems doable, then your next step should probably be to get a detailed estimate. Or you might decide you have enough information and are happy to get the project started using a flexible estimate approach (discussed later).

For some customers who have more financial leeway and are not as financially sensitive, a ballpark estimate may be sufficient. We only recommend starting your project with a ballpark quote if you clearly understand that it is a very rough estimate and that costs are not guaranteed.

When customers think of estimates, they usually think in terms of a detailed estimate where they can know the costs of the product upfront and can be assured they won’t go up substantially.

A detailed estimate is easiest to produce for smaller, well defined projects like websites and small products where the outcome is well defined and the project is 100 hours or less. As you start getting beyond 100 hours of work, the margin for error starts creeping in and such estimates can become notoriously inaccurate unless they are done very thoroughly.

If a detailed estimate is desired, both parties must get on the same exact page and there’s only one way to do that: to create a detailed Product Specification Document, along with wireframe mock-ups.

To create a detailed estimate, you will take part in a RoadMapping Session. This is a small paid project to blueprint out your digital product or app.

Here is what we do in a Roadmapping Session:

This kind of estimate is very thorough and eliminates most of the points of misunderstanding. Because the details of your product are clearly defined, this is one of the least risky approaches.

After an estimate is prepared using this methodology and the project begins, the goal during development is to avoid departures from the specification document in order to stay within the detailed estimate. Having said that, if new features are in fact needed, the scope of work can be adjusted by a change order, which can impact the budget.

This kind of estimate is a rather conservative approach and seeks to protect both parties by getting a clearly defined scope of work agreed upon by both parties.

How Long Will It Take?

Creating a product specification document along with wireframes typically take anywhere from 16 – 40 hrs of work, but this varies depending on the size and scope of your project. It might take 2-4 weeks to complete this process.

Here are the factors which impact how long the process will take:

Many of these factors are under your direct control and we will work diligently to keep your costs down and conserve time.

Estimates to Produce a Detailed Estimate

The below table shows estimated time and costs to produce a detailed product specification document for variously sized projects:

Historically the planning phase often ends up taking somewhere between 7.5% – 12% of what the product costs to build.

How Accurate is a Detailed Estimate?

It can be very accurate depending on how thorough a job is done in the planning phase. The final costs can be within a very acceptable margin of error of 0%-15%.

Why You Should Get a Detailed Estimate

If you’re very risk averse and are on a shoestring budget, then you should be looking toward creating a detailed estimate. This will allow you to:

A startup on a shoestring budget can’t afford setbacks, cost overruns and do-overs. Our detailed estimate approach is a proven method that has worked for more than a decade on simple to complex digital products and is used in many other industries, such as building homes and in the manufacturing of almost all products.

The Most Common Approach

The third type of estimate that we use is called a “flexible estimate”. This is the most common approach to estimating and building complex software, especially for projects in the 500+ hour range.

In a flexible estimate we do a rapid planning session that takes around 1-3 days to complete and costs around $1,000-$3,000. During this we rapidly document out the site’s core features. Then we have our developers assemble an estimated cost range by estimating the complexity of each of the main system components. This is far more accurate than a ballpark estimate but less accurate than a Detailed Estimate. We go over the estimate with you and describe our product assumptions, areas of risk and our vision.

If the estimate is acceptable, we proceed directly into development in a very organized manner. The product will be built incrementally, little by little. Each week we decide what will be built over the next two weeks. At the end of two weeks we have a show-and-tell to showcase what was built. This provides transparency and accountability on a regular basis, to assure nothing gets off track and the budget can be watched and measured week by week.

With a flexible estimate we dive quicker into development and week by week we build upon the previous week’s work. Since new code is delivered every 2 weeks, you will be able to provide a lot of input and guidance about what was built, which helps steer the product to your desired result. During these weekly meetings, you can remove, modify or add new features at any time. You can control the budget by specifying what you want built and what you don’t. Features can be put on hold or skipped. As we proceed with weekly meetings both the customer and vendor build a tight bond, where both parties are working toward the same goals.

This flexible approach is the way most software is built in Silicon Valley. It is an ideal approach in that you only pay for the work that is completed and can change the scope of work at any time. The focus is on building a minimum viable product and getting it into the marketplace quickly for customer feedback.

We prefer this method because it allows development to begin quickly and it acknowledges the fact that it’s almost impossible to plan for every contingency up front, no matter how hard you try. It’s the most fair because you only pay for what gets built and the teams have a mutual interest in staying closely integrated and committed to the process. Both parties respect one another’s time and effort and there is a maximum push towards efficiency.

Which Type of Estimate is Best for You?

Many times the best approach is the one that matches your personality.

If you just want to get a rough idea …

If you have an idea and you’re just trying to find out if it’s viable and what it might cost, then a ballpark estimate might be okay initially. That will give you a sense of what you’re up against and whether or not you can reasonably pursue the project. If you decide that the ballpark estimate is in an acceptable price range, then you can go to the next step and either do a Product Specification or proceed with the project with a flexible estimate.

If you’re a very detailed oriented person and risk-averse, then a detailed estimate is probably right for you. The time invested upfront in planning, minimizes almost all of the downstream financial and project risks. The only potential downside for some is that you spend a lot more time upfront in planning, which from our experience works best with very detail oriented people. The time in planning provides new insights and gives you an opportunity to discuss your product with an experienced team who can provide valuable feedback. It also allows you to know within a tight margin of error, what your expected costs will be.

If you’re not a “details person”…

If you’re not a “details person” or you’re much more action oriented, then a flexible estimate is the best approach for you. This allows you to get right into development and start seeing your product be built immediately. Our experienced team will guide you and seek to minimize your costs at every turn. As you see the app come to life, you might change course on some features, add new features or even decide to put some features on hold. You’ll be fully in control and you won’t be committed to any particular scope of work.

Let’s Work On Your Estimate!

Whether you want a ballpark estimate, detailed estimate or flexible estimate, ClearTech Interactive can work with you to meet your project needs. We offer all three types of estimates and work with you to find the right fit for you.