How Mobile Apps Are Built 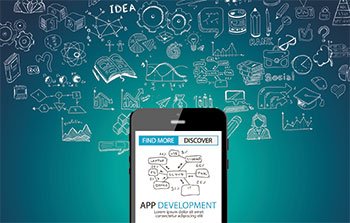 Today we can use an intermediary language such as Javascript to build your app. We can then export this code to create an app for both Android and iOS, instead of building each independently at much greater costs. There are pros and cons of doing this but the good news is that today, it’s a solid option for many apps. In this article we’re going to touch on the 4 primary ways you can build an app.

Native apps are built specifically for a mobile operating system such as Apple iOs, Android or Windows phone. The app must be built to conform to the requirements of each operating system and is not interchangeable one with the other; therefore you cannot use an iOS app on an Android device and vice versa. Native apps are usually built by a developer in the specific language necessary for the desired platform. These apps are downloaded from the respective app store to the device and are stored in the device’s memory, making them ready for use at the click of the icon. They are highly customizable and offer a wide variety of structure and visual appeal.

Native apps offer the best user experience as they follow the conventions of the platform’s user interface (UI) and are faster and more reliable. These apps have access to phone hardware and operating system features such as camera, gyroscope, sensors, gps, accelerometer, address book, calendar, phone, etc. They are easily found in the platform’s app store and many are able to be used without an internet connection. They are more expensive to build than other types of apps, but also offer the most advantages.

To build cross platform apps, developers use tools such as React Native, NativeScript, Xamarin, or Appcelerator.

Hybrid apps are built using HTML5, Javascript and/or CSS. They may look like a native app, but they are really just glorified websites, wrapped up into a downloadable app. Hybrid apps are easier and faster to develop, and are usable across all devices, which makes them appealing to some companies who want to save time and money and still have an app presence. They do however rely on using a web browser to power them. Hybrid apps can use your smartphone’s geolocation, gyroscope, camera, accelerometer and local storage. Hybrid apps are not as fast as native apps however, and lack the performance and optimization available with native apps. Companies may consider using a hybrid app to offer their existing website customers a sort of interim mobile app, without making the full investment to build a native app. This could be a nice intermediate option, especially when a business already has a devoted client base and can offer them a bit more by having access to a mobile app on the go.

Web apps aren’t really apps at all but are websites designed to be accessed through a smartphone’s web browser. The resulting web page will be designed to look very much like a mobile app. Because they rely on a browser to run, they do not require much device memory. They are also built using HTML5, Javascript or CSS and offer an option to install onto a phone by the user creating a bookmark to the website. Because they are specially designed for mobile devices, they do feel more like apps than web pages. They are accessible on any device where there is an internet connection, which is one advantage. This can also be a disadvantage if the connection is poor or non-existent. Web apps also have less options for connecting to native phone API’s.

Explore How Mobile Apps are Built at ClearTech

At ClearTech Interactive we know that every customer has different needs, ideas and resources for their mobile app project. Fortunately we offer several routes to take for building mobile apps.

Since 2003 we’ve built thousands of projects for our clients. We offer a free consultation ($250 value) to discuss your mobile app idea and provide some guidance.

Request a Call or contact us at 727-562-5161 to find out what we can do for you. We offer full digital solutions to power and grow your business.